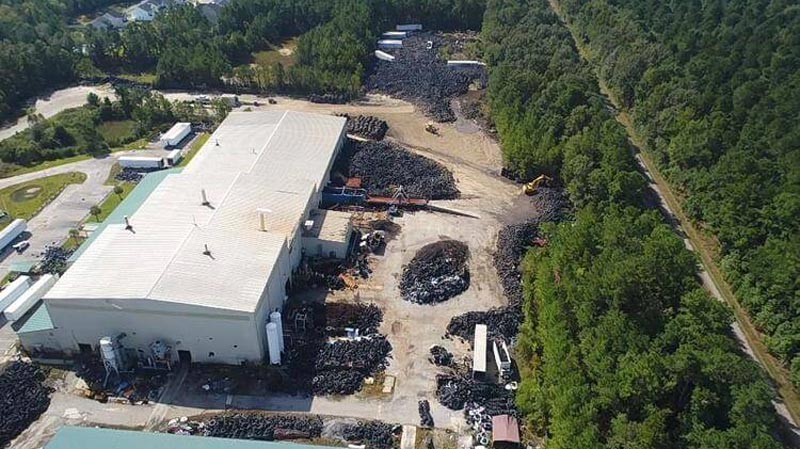 As reported by The Berkeley Independent on October 3rd, 2018

Just over six weeks into the cleanup, more than 25 percent of the hundreds of thousands of discarded tires have been removed from a defunct recycling site in Berkeley County.

The abandoned Viva Recycling site on Cypress Gardens Road had an estimated 800,000 tires when Liberty started the cleanup Aug. 20.

Nearly 2,500 tons of tires have been removed as of Monday, according to county officials. Each truckload averages about 14 tons.

Before the project started, Liberty thought a good pace was to remove six truckloads of tires per week, but with “some logistical improvements” the pace has quickened to seven trucks per day, Helton said.

A manager and two heavy equipment operators work at the site daily, he said. The crew, which includes Helton, rotates weekly. They work eight hours a day weekdays. The effort was stalled for a couple of days in late September when many of the state’s roadways were closed due to flooding from Hurricane Florence, officials said.

County Councilman Ken Gunn, whose district includes the site, flew a drone over the 21-acre tract on Tuesday and was surprised by the photos, he said.

The county has been happy with Liberty’s progress, according to its spokeswoman.

“Liberty Tire Recycling has been very efficient in the removal of tires from the Viva site,” said spokeswoman Hannah Moldenhauer. “It’s too early to gauge whether they are ahead of schedule but county leaders are very encouraged with their progress thus far.”

When Liberty won the bid in June, it estimated it would take about 10 months to remove the mountain of discarded rubber.

At this rate, the tires could be cleared by early February, as much as four months ahead of schedule.

Working faster will not save any money, though. The company is being paid $239 per ton.

The state’s Department of Health and Environmental Control has set aside $2 million from its waste tire fund to pay for the cleanup. That amount would cover 8,368 tons, or approximately 836,800 tires.

The tires are being taken to Liberty plants near Raleigh and Charlotte, where they will be processed for other uses such as landscaping mulch and paving material.

Residents and officials were concerned that the site was a public health hazard after Viva was closed last year for multiple permit violations.

County Mosquito Abatement has been monitoring and spraying the site for mosquitoes, which breed in standing water inside the tires.

No residents of neighboring Fairmont South community have complained during the cleanup, Gunn said.

The effort was spurred by The Post and Courier report Tire Failure, which exposed how lax state oversight and corporate missteps fueled the rise of massive tire piles in Moncks Corner, Anderson and Jacksonville, Fla.

The newspaper documented how Viva Recycling executives had a string of bankruptcies in the Northeast before launching their tire recycling projects in South Carolina. Despite those failures, state and local officials greased their entry into South Carolina by green-lighting $16 million in tax-exempt bonds and a $400,000 loan.

As the recycling company began to fail, Gunn said he was aware of the situation.

“We kept getting assurances that something was going to happen then nothing would,” he said. “Then, quite frankly, The Post and Courier article kicked them in the ass and got something going. It had nothing to do with Ken Gunn’s previous 20 phone calls. It had everything to do with that picture in the paper.”

The effort is being funded by a $2 million grant from the S.C. Department of Health and Environmental Control.

During the cleanup process, Berkeley County sheriff’s deputies are patrolling the area and the site is being monitored by Pimlico Fire Department.

The public is not allowed on the premises.